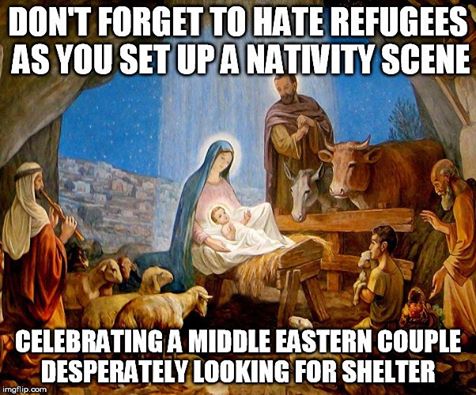 A little context is necessary here.

Back in the very early 1990s, I had a conversation with my grandmother who lived in Miami Beach, about the influx of Haitian refugees (Boat People). She blamed the entire situation for forcing her out of her home in Brooklyn (because it’s so much easier to blame people for trying to make their lives better) and she told me about the ship the US turned away during the war, as if that justified her racist remarks.

Grandma’s long gone, but that whine has stuck with me long term, like a lot of other things she told me about her version of history.

The irony that she chose to move to Miami (trading Hatian refugees for Cuban refugees) was not lost on me then.

Thing is, with the Internet, it’s really easy to find the history of her remarks, however wrongheaded I think they were then.

The U.S. Government Turned Away Thousands of Jewish Refugees, Fearing That They Were Nazi Spies: In a long tradition of “persecuting the refugee,” the State Department and FDR claimed that Jewish immigrants could threaten national security

That’s what’s so inherently disturbing to me about the current hostility toward refugees from Syria and other war-torn areas of Europe, Africa and South America.

Those of us with a shred of decency and a memory for empathy understand the plight of these people who would rather have stayed home, if only their homes weren’t destroyed and dangerous to stay near.

The image of a sole boy in an ambulance, covered in dust and blood, a small body washed up onshore, neither of these images is strong enough to secure the required empathy of people who hear the word “migrant” and instantly associate these people with “freeloaders who want something for nothing.”

I would not be here now were it not for similar actions against the villages of my ancestors, at the turn of the last century. My great grandparents fled similar conditions in the Pale, seeking a safer place to raise their children. We are lucky we left Europe when we did, because the majority of us survived, amid intense racism.

Some of my family did not make it to safety, however, and some chose to move instead to England.

At one point, I thought (naively) that England might be an alternative to a fascist takeover of the US, but I’ve since come to the conclusion that England wouldn’t necessarily want me. The Brexit vote is a symptom of a much larger problem, pushed by the UKIP and driven by a lot of the same gut-founded emotional crap that kept the SS Drottningholm from discharging its cargo of refugees. It’s the same crap that’s driving far, far too many people to support Trump in this election.

I used to think (also naively) that the only reason the GOP feared refugees was that they might import more Democrats and that was not to be tolerated, but this has devolved into something much, much uglier. It’s about failing to accept responsibility in any conceivable way for the plight of these people, to shove them back into the shadows, and to continue to inflame the existing problem so that their endless war can continue indefinitely.

What’s saddest about this is that these demagogues imply that if we elect them, they’ll keep us from war.

Yeah, well, George W. Bush and Dick Cheney did a bang-up job. We’re still paying that bill. Putting the GOP in charge of this country in anything other than dogcatcher virtually ensures war will never, ever, end. The refugees will never escape, and we won’t, either, if the other countries close their borders to us.

We can’t conceive of a time when we won’t be able to travel, but what’s to stop other countries from rejecting US for the same reasons we reject THEM?

Which wins? Democracy or Theocratic Fascism November 8, 2022
5 months to go.